Wyandanch Memorial High School JROTC recognized by Board of Education

The Wyandanch Memorial High School JROTC was recognized by the district’s Board of Education for winning first place in five different challenges in the Commander’s Cup.

After presenting the colors to the board and those in attendance at the meeting, the JROTC teams were presented with certificates by Superintendent of Schools, Dr. Gina Talbert who celebrated the success of the JROTC and their wins at the event.

“Our JROTC team has accomplished amazing and phenomenal feats. They have been sharpening their leadership practices and good decision-making skills toward a career path that will be fruitful, meaningful and significant in their future choices,” said Dr. Talbert. “Their participation and success in the Commander’s Cup are proof that if you keep your focus, are committed and continue to work hard, the best is truly yet to come.” 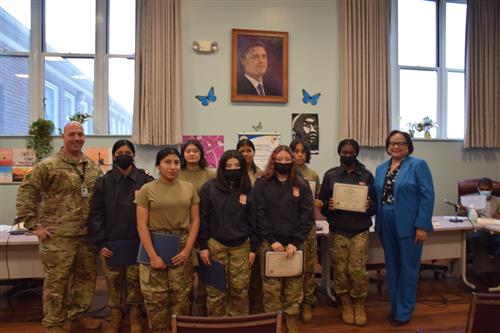 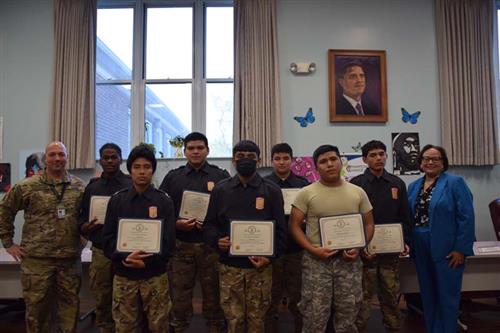 *This website is managed by the Wyandanch UFSD. The material contained within the electronic pages of this website is for the use of the school district community. The central purpose of this website is to inform the public regarding school business. We make every effort to ensure that no offensive or inappropriate material will be published on the site; however, we have no control over the constantly changing landscape of the Internet. If you see questionable material on this site or any linked sites, please email the webmaster at webmaster@wufsd.net. The Wyandanch UFSD disclaims any responsibility for inaccuracy/omissions of information contained on this Site or sites to which it provides outside links. Reference to any commercial product or service does not constitute an endorsement thereof. This Site may contain links to third-party web sites, and third parties may provide links to this Site. Any links on the Site are provided solely as a convenience to users and not as an endorsement by the School District of the content on such third-party web sites, or any affiliation or association with its operators. The School District is not responsible for the content of linked third-party sites, including without limitation any link contained in a linked site, or any changes or updates to a linked site, does not make any representations regarding the content or accuracy of the material on such third-party web sites. If you decide to access linked third-party web sites, you do so at your own risk. Your use of third-party sites is subject to the Terms and Conditions of use for such sites. No warranty of any kind, including but not limited to warranties of non-infringement of third-party rights or freedom from computer virus, is given regarding this Site or the links to third-party sites or sources. The original content of wyandanch.k12.ny.us may not be used, except for educational purposes, without permission of the webmaster.
pinterest youtube vimeo twitter flickr dropbox linked in facebook instagram
Copyright © 2002-2022 Blackboard, Inc. All rights reserved.